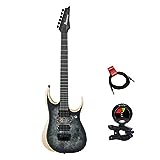 Gretsch G5420T Electromatic Hollow Body Guitar with Bigsby – Orange
Details on Amazon
We’ll start with a big old hollow body, which is the only hollow body featured in this review and is easily the best hollow body you’ll get for under $1000, bar none.It’s the gorgeous Gretsch G5420T Electromatic, and we’ve gone for the stunning orange color, but for those less daring, it also comes in Black, Sunburst and Aspen Green.It features all-new Black Top FilterTron pickups, which are based on a vintage Baldwin-era FilterTron pickup that the Gretsch R&D team recently unearthed. It had knockout punch and a phenomenal twang, and they liked it so much that they took the ‘DNA’ from the vintage pick-up. It was then crafted to become the basis of the dynamic new Black Top FilterTron.The pick-up is used on all the companies Electromatic hollow-body instruments, including the G5420T and gives them an electrifying new voice and identity.Regarding its looks, the G5420T is undoubtedly a looker, with a bound single-cutaway hollow body as well as sound-post bracing and elegantly bound f holes.It features include a maple neck, on which you’ll find a bound rosewood fingerboard with 22 medium jumbo frets. The neck inlays are hump-block pearloid inlays. It has a silver plexi pickguard, a three-position pickup switch, and classic arrow design control knobs.The Adjusto-Matic bridge has a rosewood-base. It has vintage-style open-back tuners, chrome plated hardware throughout and who could forget the gorgeous Bigsby licensed B60 vibrato tailpiece.So, if you think a hollow-body is the way to go, you have just found your perfect partner to join you on the Stray Cat Strut – the Gretsch G5420T Electromatic.

Fender American Special Telecaster, Maple Fingerboard, Vintage Blonde
Details on Amazon
The Fender American Special Series Telecaster comes in at just under our $1000 limit and is a few hundred dollars cheaper than the American Standard Series Tele. For under a grand, it’s everything you could want in a U.S. made instrument from guitar manufacturing legends, Fender.We’ve gone for the vintage blonde color option with a maple fingerboard because we were going for the most classic color combination. But it’s also available in three-tone sunburst with a maple neck at the same price.Or if you want to go slightly over the price limit, you can get it in Sherwood Green, Lake Placid Blue, or three-tone sunburst – all with rosewood necks.It features an alder body, a satin-finished maple neck with 9.5″ radius fingerboard and jumbo frets. This gives the guitar a fast, modern feel and makes it effortless to bend strings while remaining perfectly in tune.A pair of Texas Special Tele pickups are used to capture the sound, and they deliver contemporary and classic tones that are perfect for Blues, Rock, Pop, and Country.The Special Series Tele goes old-school with its vintage style string through body, three brass saddle Telecaster bridge, and gloss urethane finish. It even features a Grease bucket tone circuit which rolls off the high frequencies without adding bass.Classic shape, classic look, classic sounds, you just can’t go wrong with a Fender American Special Series Telecaster.

Ibanez RGDIX6PBSKB RGD Iron Label 6 String Electric Guitar Bundle With Guitas Clip On Tuner and Instrument Cable -…
$899.99
Details on Amazon
Now, we went all rockabilly with the Gretsch and all country/country rock with the Telecaster, so it’s now time to get dark and menacing with a guitar made for METAL! – The Ibanez RGD Iron Label to be precise.And since we seem to have developed color as a sub-theme of this review, we’ve gone for the wonderfully named Surreal Black Burst – what could be more Metal than that? If you don’t want to go all Spinal Tap and “none more black,” you could, of course, go for the far brighter Surreal Blue Burst or the Blue Space Burst.The RGD Iron Label is optimized for playing the heaviest music styles. Where executing every note with precision and power is all important.The 3-piece maple/bubinga neck with the Nitro Wizard neck profile is topped with a luxurious ebony fingerboard, which makes the guitar play beautifully. It’s deep cutaways giving you unrestricted access to the upper registers, so every note is within easy reach.It’s DiMarzio Fusion Edge humbucking pickups deliver a powerful scooped tone with tight bass response and crisp high-end bite. Making it the ideal guitar for high-speed staccato riffing and for bludgeoning djent chugs.It comes supplied with a Snark clip-on tuner and a 10 foot guitar cable.The Ibanez RGD Iron Label RGDIX6PB is a metal or a progressive metal player’s dream come true. If you’re either, you now know what you should be playing.

Fender American Special Stratocaster, Maple Fretboard – 2-Color Sunburst
Details on Amazon
Fender is undoubtedly one of the leaders in guitar manufacturing since they formed in 1946. First came the Telecaster (well the Broadcaster as it was then known) and that was followed by the guitar that has probably been used on more records than any other – the Fender Stratocaster.And the latest incarnation of this timeless classic is the American Special Series Stratocaster HSS.We’ve again gone for the classic color combination of a two-tone sunburst with a maple neck, but it’s also available in Olympic White, Mystic Seafoam, and Walnut – all with maple necks for the same price.Or, if you want to spend a little more, you can get a rosewood fingerboard version in either Sonic Blue or Two-tone Sunburst.Features include the incredible contoured alder body, a maple neck with 9.5″-radius fingerboard, and 22 jumbo frets. As well as three Texas Special pickups, and a satin urethane finish.And, if you want to express yourself even more with pitch variations – you’ve got Fender’s famed Synchronized tremolo, which has always been a signature ingredient of the Stratocaster.Whereas, if you’re looking for darker, thicker tones while still retaining clarity, you can use the Grease Bucket tone circuit to roll off the high frequencies without adding any bass.These all add up to a very versatile guitar, that can easily cover Rock, Blues, Funk, Country, Pop and just about any other genre as well. This ensures that the American Special Series Stratocaster still remains true to the icon that Leo Fender invented more than 60 years ago.

Schecter Guitar Research SCHECTER 3105 E-1 CUSTOM VSB
$899.00
Details on Amazon
Schecter has grown steadily to be a brand to be reckoned with over the years, with more and more well-known, professional players using their guitars. They also think differently to the established brands, in that they do not stick to the same design year after year and are not afraid to try new ideas.They use the same, if not better quality materials in crafting their guitars and the quality of the finished product is as good as, and in most cases far better than, most of the established brands. Brands who are merely relying on their name and past successes to sell average quality guitars.This means that they create far better guitars, build from the best materials with an incredible build and finish quality. We mentioned that many Fender Telecaster buyers have noted sharp and poorly finished fret edging on their guitars, that’s as rare as a chocolate toaster on a Schecter.One example of this philosophy is their Special Edition guitars, which are all very limited and often unexpected. Each one is a short-run creation of between 25 to 50 units, so you’re very unlikely to end up playing a festival and finding another guitarist on the line-up, with the exact same guitar as you!What makes them Special Editions varies, but it can be as simple as an unusual finish or as bizarre as something completely left field!Schecter uses the Series to test new guitar concepts and to fill a particular niche, no matter how small it is. And what’s fantastic about these guitars, is that the models change and evolve over time, so not only are you getting a fantastically well-built and great sounding guitar, but also one that’s incredibly collectible!Regarding specifications, the Schecter E-1 Custom Special Edition is an Ultra Access mahogany body with a quilted maple top and a set three-piece mahogany neck with an ebony fretboard. The Thin ‘C’ shaped neck features mother of pearl block inlays and has 22 X-Jumbo frets.The bridge pickup is a Schecter USA Sunset Strip, while you’ll find a Schecter USA Pasadena in the neck position. It has a Volume and Tone knob and a 3-way selector switch.It’s obviously based on a Gibson Explorer, the guitar of choice of everyone from U2’s The Edge to Metallica’s James Hetfield, but we have to say the Schecter is a better guitar in every way but one. It’s got a far higher build quality, sounds and plays better, is cheaper – the only thing it hasn’t got is the ‘Gibson’ name stamped to it. It’s incredible how much some people pay for a name?If you want a unique guitar and you believe that build quality, playability, and the sound are more important than the name, then go get yourself a Schecter, I promise that you’ll be more than happy with your decision.

So, what’s the Best Electric Guitar?

So, there you have them. The five best electric guitars you can buy for under $1000. Everyone is superb in its own way, and that’s why unusually it’s very difficult to pick an overall winner, so for this review, the winner is…All of them!They are all the best of the best within the price limit, if we had decided that the Telecaster is the best and you want to play Rockabilly or hardcore, then it obviously isn’t. Therefore, just choose whichever guitar best suits your style, that way you will end up with the best electric guitar for YOU, which is, of course, the most important thing.Have fun playing whatever guitar you choose, and we’ll see you again soon for more great reviews.The online Rubiks Cube solver program will help you find the solution for your unsolved puzzle.
The Best Way To Learn Guitar Online Fast

The road can open your mind to new experiences and

In this roundup, I’ll be taking an in-depth look at

Loopers are simply fantastic, they are useful for any guitarist,